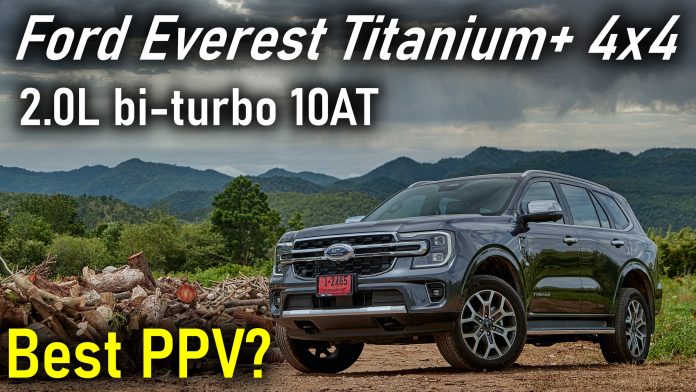 PPVs (Pickup Passenger Vehicles) are highly popular in Thailand and the Ford Everest is among the top choices in this market.
Compared to the all-new Ranger pickup, the 2023 Everest boasts a the same front end design featuring C-Clamp headlights, along with a luxurious interior and seven seats.
This is the third-generation Everest, which was based on the T6 Ranger and first introduced in 2003 for Asia-Pacific markets. The Everest is produced in Thailand and exported to over 100 markets around the world.
In Thailand, the new Everest is available in four variants including the Trend (Bt1,334,000), Sport (Bt1,464,000), Titanium+ 2WD (Bt1,704,000) and Titanium+ 4×4 (Bt1,854,000).
The Trend and Sport are equipped with a 2.0-liter single turbo diesel capable of producing 170hp and 405Nm mated to a 6-speed automatic gearbox, while the Titanium+ variants are powered by a 2.0-liter bi-turbo engine with 210hp and 500Nm along with a 10-speed automatic transmission with e-Shifter in the top 4×4 variant.
Thailand does not get the turbocharged V6 engine with 246hp and up to 600Nm of torque that’s also offered in certain markets such as Australia and the Middle East.
In this video the Everest is taken both off-road and on-road, with real-world fuel economy figures taken from Kanchanaburi to Bangkok covering approximately 160kms. 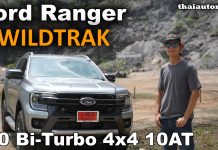 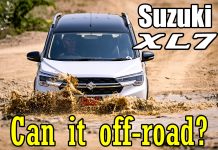