British super luxury carmaker Rolls-Royce has finally unveiled its first SUV – the Cullinan.
There is a lot to mention about the Cullinan, but first let’s take a closer look at where its name comes from – the world’s largest diamond.
According to Wikipedia, the Cullinan Diamond is the largest gem-quality rough diamond ever found, weighing 3,106.75 carats (621.35 g), discovered at the Premier No. 2 mine in Cullinan, South Africa, on 26 January 1905. It was named after Thomas Cullinan, the mine’s chairman.
Meanwhile, more than a hundred years later, the Rolls-Royce Cullinan is a 5.3-meter long SUV with a wheelbase of 3,295mm, and weighs 2,660kgs. It is indeed a full-sized luxury SUV that is more than fully-equipped, coming with more features than you’d expect.
Rolls-Royce said initiated the Cullinan project 3 years ago due to the large number of customer requests for a “Rolls-Royce of SUVs” with unprecedented luxury, performance and usability not seen before in the SUV market.
Many of these customers are basically younger than the average Rolls customer, but are also high-net-worth individuals who wanted more action with their vehicles. 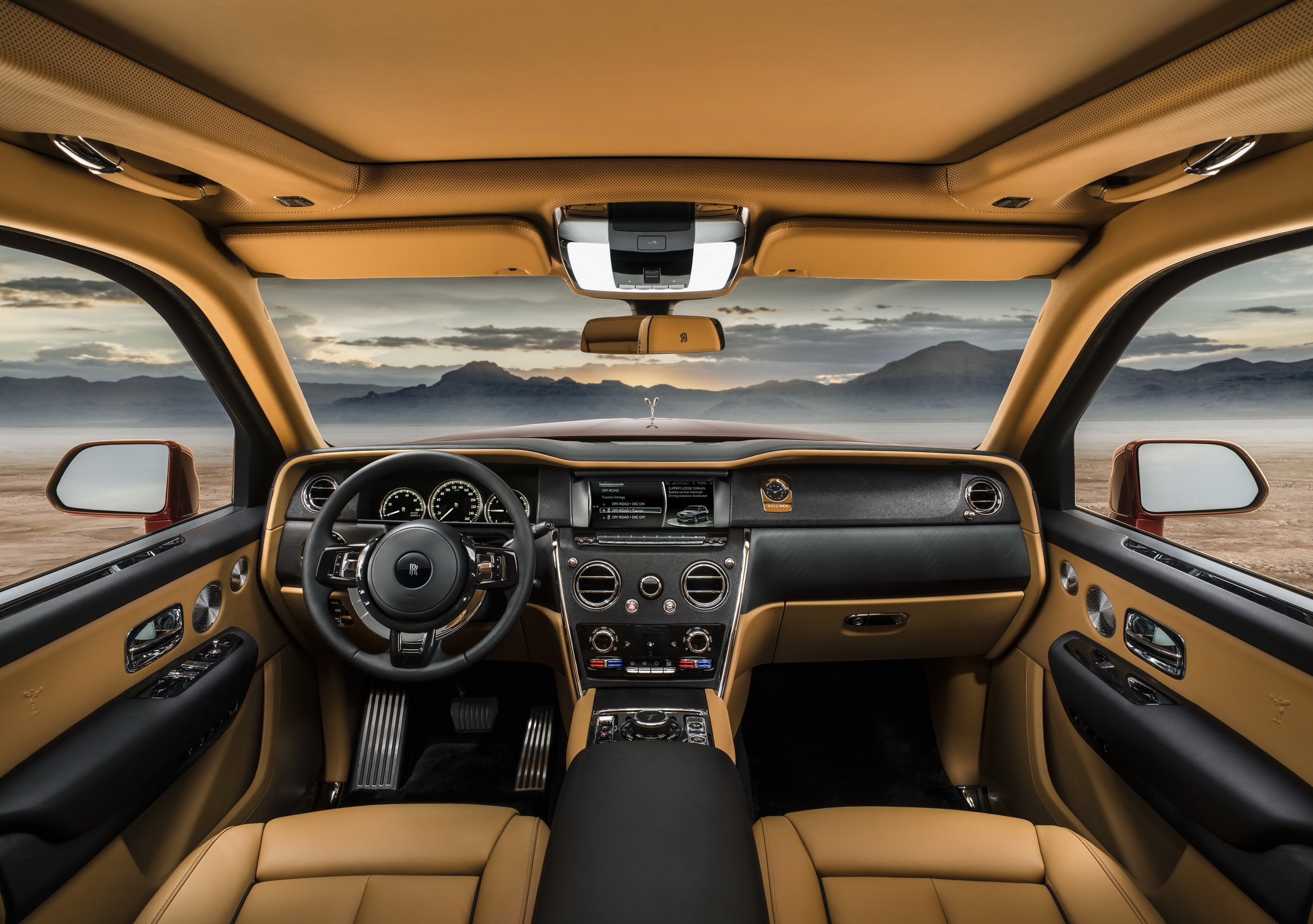 Apart from being the first SUV from Rolls-Royce, the Cullinan is also the first vehicle from the company with a rear tailgate. It is a 2-piece design nicknamed “The Clasp” and each can be individually operated via the key fob button.
The doors aren’t conventional either, with coach (suicide) doors being used similar to other Rolls models. In fact the Cullinan has a lot in similarity with the Phantom flagship model, starting with the large front grille that gives it a super-strong presence along with that “Saxon warrior” expression.
The general shape of the Cullinan’s body take on a “Block” design that maximizes interior space. There are 2 rear seat configurations offered – Lounge or Individual seats. The first offers seating for 3 and can be fully folded electronically in a number of configurations. The standard 560 liters of space grows to 600 liters with the parcel shelf removed, and can be maximized to 1,930 liters.
The rear seat base is higher than the floor (Pavilion seating), and when the seat backrests are folded, act as a barrier preventing items in the boot to slide forward. But for long items, the boot floor can be raised electrically to meet the seat base, allowing long items to be slid in easily. 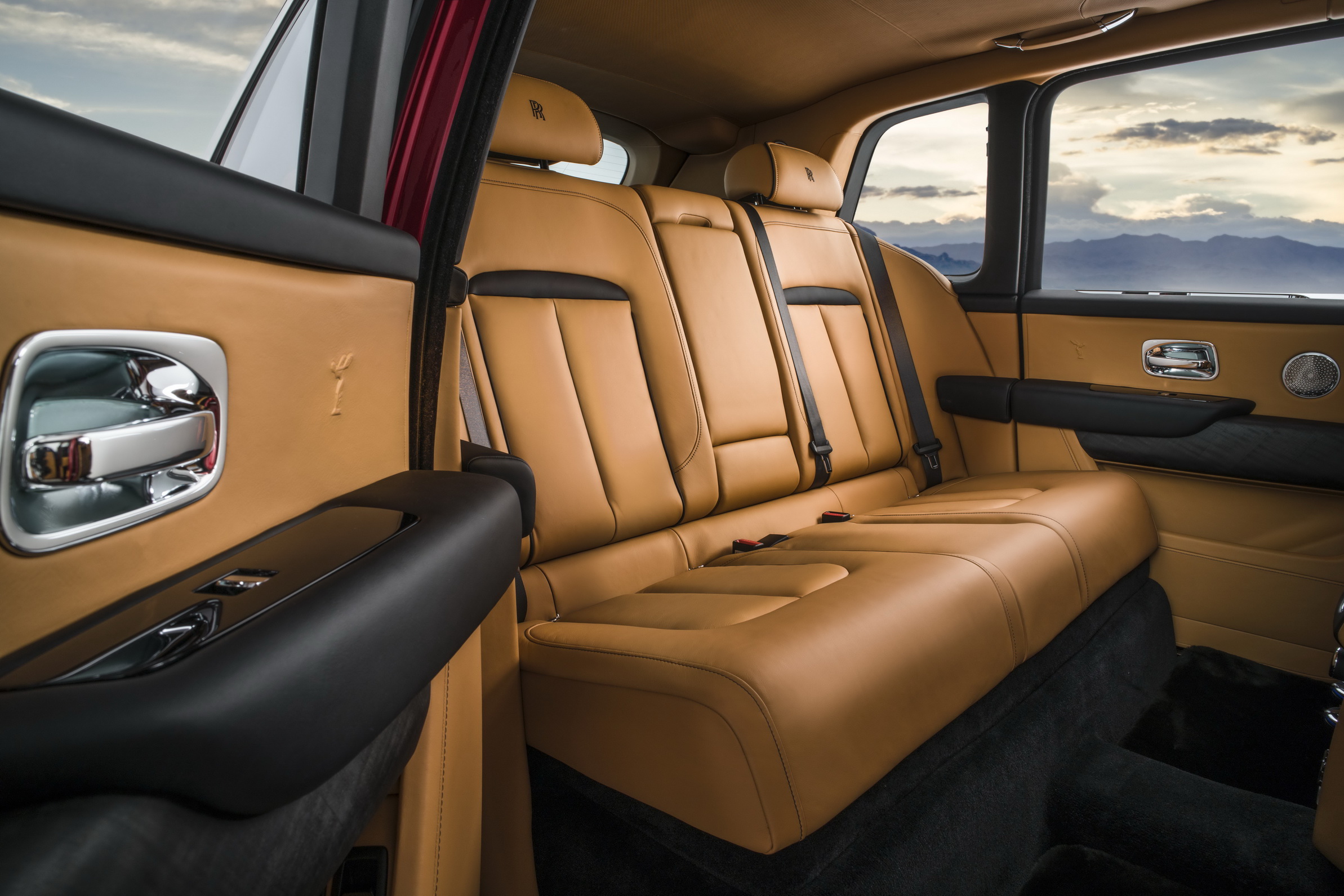 Meanwhile, the Individual configuration is the more luxurious choice, with 2 rear seats being separated by a Fixed Rear Console featuring a drinks cabinet with whisky glasses and decanter, champagne flutes and a refrigerator.
And “inspired by the age when one never travelled with ones luggage”, a glass partition between the passenger cabin and luggage compartment can be ordered. Additional benefits include less noise and cooler cabin.
While occupants enter the Cullinan, it automatically lowers itself by 40mm as a gesture of welcome. The console is reminiscent of the Phantom, with the highest levels of luxury (customers are able to choose preferred materials).
Apart from the central touch screen the driver can adjust vehicle setting through the off-road and Hill Descent Control buttons as well as the Air Suspension height adjustment controls. Other features include Night Vision and Vision Assist including daytime and night-time Wildlife & Pedestrian warning; Alertness Assistant; a 4-Camera system with Panoramic View, all-round visibility and helicopter view; Active Cruise Control; Collision Warning; Cross-Traffic Warning, Lane Departure and Lane Change Warning; an industry leading 7×3 High-Resolution Head-Up Display, WiFi hotspot, and the latest Navigation and Entertainment Systems from BMW.
Rear passengers get their own touchscreen too, and there are 5 charging USB ports around the cabin, while phones can be charged in front of the cabin.
Although the Cullinan is an SUV, expect the smoothest ride just like any other Rolls-Royce model. The company says that the engineering team of the Cullinan started by building a drivetrain that would reflect the company’s “Magic Carpet Ride” philosophy. 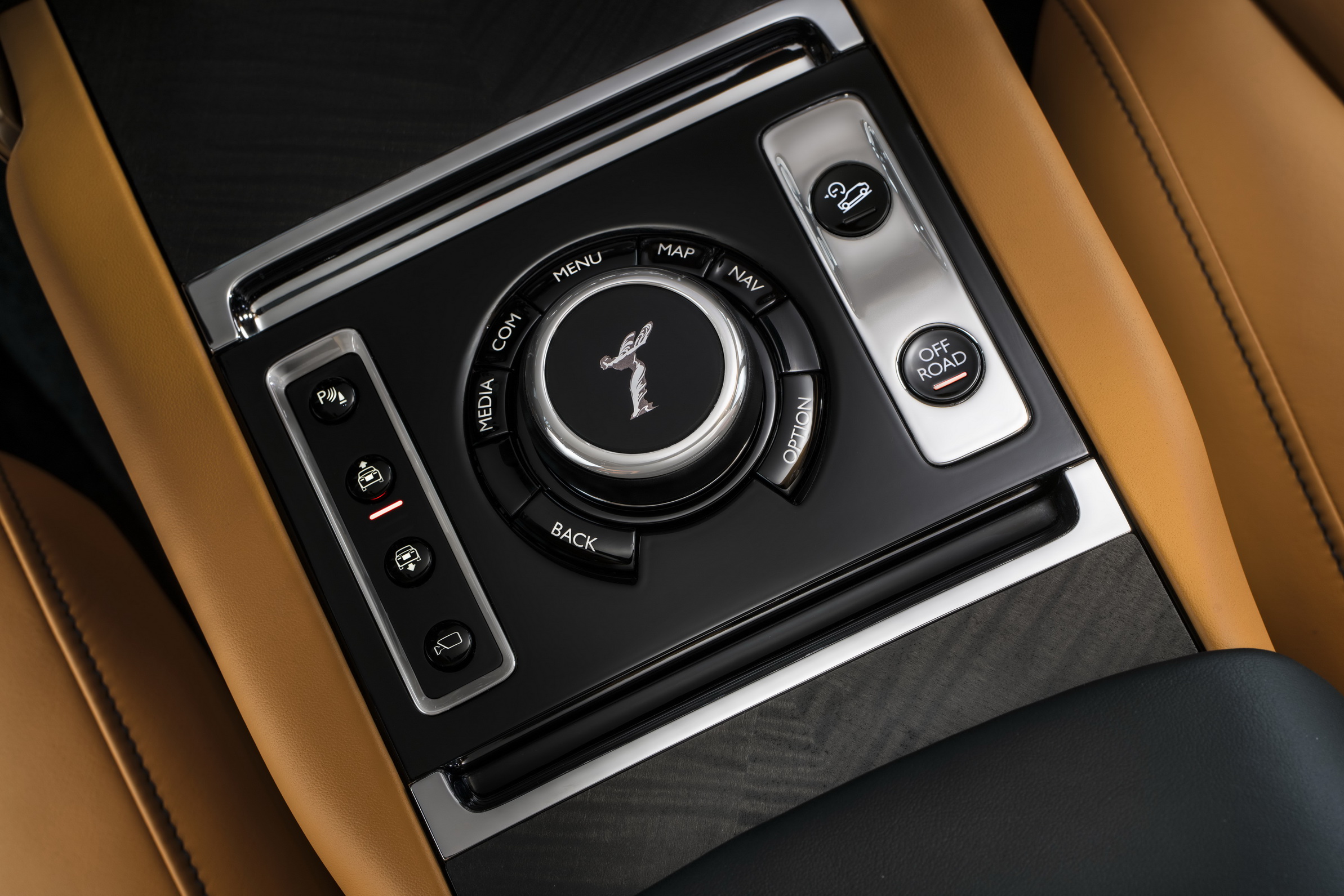 Powered by a 6.75-liter V12 engine capable of developing 571 horsepower and a whopping 850Nm of torque at just 1,600rpm, the Cullinan has a top speed of 250km/h, an indication that this is not a pure off-roader but an all-purpose vehicle that is also able to travel very fast on road.
The average fuel consumption is claimed at 15 liters per 100km (6.6km/liter) and CO2 emission is claimed at 341g/km, which doesn’t qualify the Cullinan as “eco-friendly”.
According to Rolls-Royce, the suspension system of the Cullinan makes millions of calculations every second as it adjusts the variable damping system. A new double wishbone-multilink suspension and 4-wheel steering provide exceptional performance both on- and off-road. For the latter, just press the “Everywhere” button and the car does all the adjustments. And when face with deep snow, sand or water, the Cullinan’s 540mm wading depth is the deepest in any super-luxury SUV.
In the boot, there’s a special area for the Recreation Module that features a motorized drawer housing equipment of choice, for example photography or fishing equipment.
In the UK the Cullinan would be priced at approximately 230,000 pounds, and first deliveries should commence by end of 2018 or early 2019. 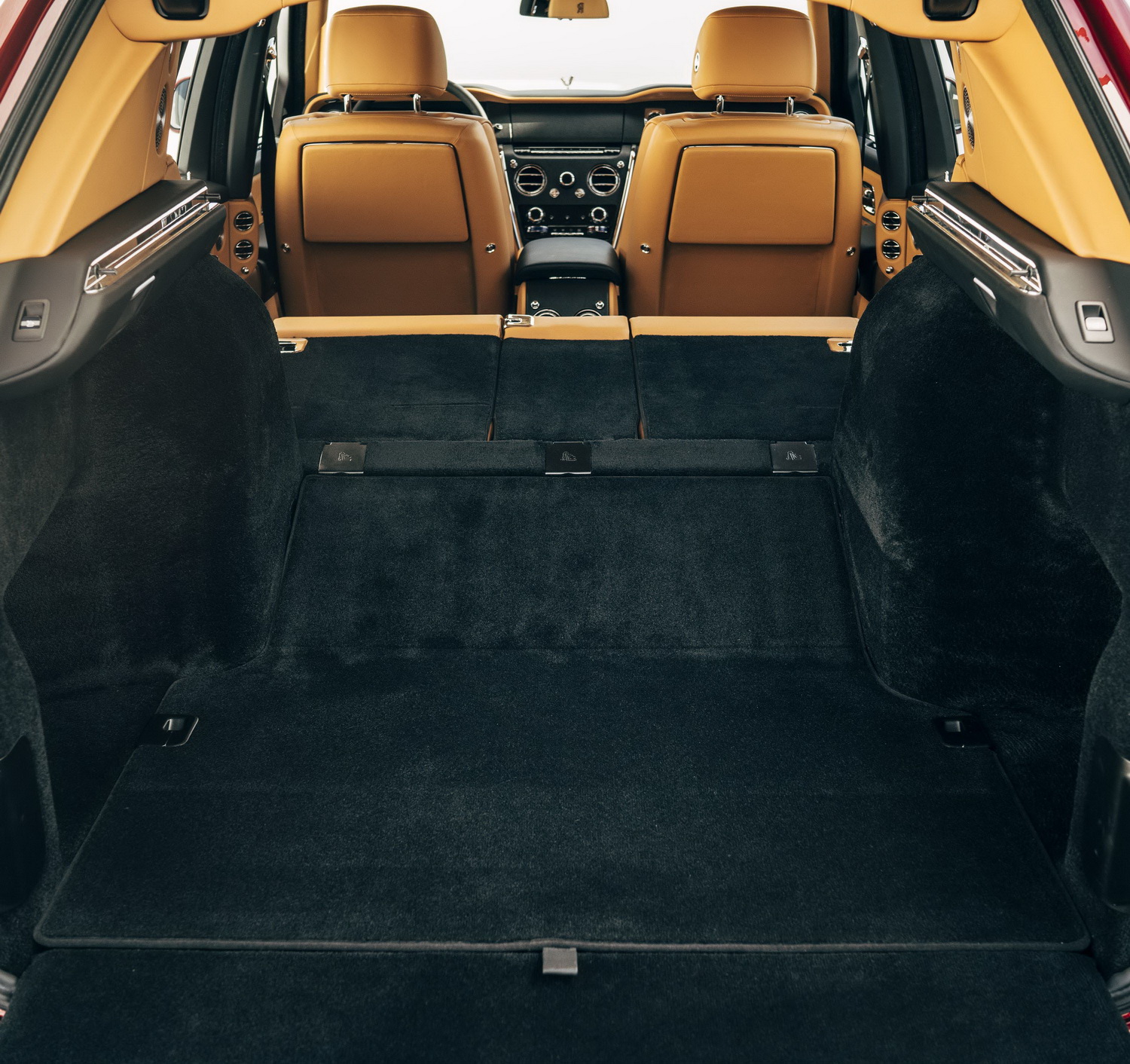 1. The engine is designed for Octane grade 95 fuel; however, it may be run on fuel with a minimum Octane grade of 91.

2. Preliminary data not yet confirmed, subject to change. The values of fuel consumptions, CO2 emissions and energy consumptions shown are determined according to the European Regulation (EC) 715/2007 in the version applicable at the time of type approval. The range shown considers optional equipment and the different size of wheels and tires available on the selected model and may vary during the configuration. The values are already based on the new WLTP regulation and are translated back into NEDC-equivalent values in order to ensure the comparison between the vehicles. For the assessment of taxes or other duties based (at least inter alia) on CO2-emissions the CO2 values may differ to the values stated here.

Further information on official energy and fuel consumption and the official specific CO2 emissions of new passenger cars can be found in the “Guide to Fuel Consumption, CO2 Emissions and Electricity Consumption of New Passenger Cars”, which is available at all outlets free of charge and at DAT Deutsche Automobil Treuhand GmbH, Hellmuth-Hirth-Str.1, 73760 Ostfildern and at http://www.dat.de/angebote/verlagsprodukte/leitfaden-kraftstoffverbrauch.html in Germany, at http://carfueldata.direct.gov.uk/ in the United Kingdom or your local government authority.