BANGKOK, Thailand – A total of 34 automobile and 26 motorcycle brands are taking part in the Thailand International Motor Expo 2019 being held at IMPACT Muangthong Thani.

Organizers expect more than 50,000 orders to be placed for autos and another 9,000 for motorcycles at this year’s event. More than 1.6 million visitors are also expected to show up, with as much as Bt56 billion expected to be spent in total.

With Thailand’s auto sales experiencing a shrinkage this year, auto makers are hoping that the event will help stimulate the market, thanks to the good number of new products being launched during the year-end period

In the eco car segment, the battle is on between the new Honda City that comes with a hyper 122-hp 1.0-liter turbo engine, the new Nissan Almera (also 1.0 turbo engine but not as powerful with 100hp) and the 1.2-liter Mitsubishi Mirage/Attrage minor change that now looks much better from the front. Even the upmarket Mazda2 subcompact has also been given a facelift in order to compete better against the cheaper city cars.

Another highlight from BMW is the M5 Competition that’s powered by a 4.4 liter V8 twin turbo engine producing 625hp and 750Nm. Acceleration from 0-100km/h takes 3.3 seconds and the top speed is 305km/h with the M Driver’s package.

Volvo, which enjoyed strong growth the past year due to attractive products and pricing, launched the V60 wagon with an aggressive pricing of Bt2.29-2.69 million for the two trims offered.

There are no new models in the pickup segment, but most players are offering special dressed up and tuned up versions, notably the Chevrolet Colorado RS with lowered suspension and dual body color, the Ford Ranger FX4, as well as a remapped Toyota Hilux Revo with 230hp. The Nissan Navara N-TREK Warrior concept off-roader that comes with a bunch of accessories.

There aren’t any new PPVs (Pickup Passenger Vehicles), but Mazda is hoping to win a slice of this market with the CX-8 crossover that comes with 3-row seating and high luxury levels. Another brand that is coming strong in the Thai market is MG. After a successful stint with the ZS EV, MG is continuing the momentum with the 1.5-liter HS SUV that offers a higher luxury level than its past products.

Supercar and sportscar lovers will enjoy coming to the Motor Expo this year. While Nissan is showing off the 555-hp GT-R 50th Anniversary edition that’s also being offered for sales in Thailand, Toyota have also decided to sell its new 340-hp Supra here too, pricing it similarly to its BMW Z4 sibling .

Porsche, probably the most popular sportscar brand in the Thailand, is highlighting the new Cayenne Coupe and the mid-engines 718 Cayman with AAS Sport Package.

Lamborghini is also present this year with the Huracan EVO Spyder, powered by a 640-hp V10, but the real heart-thumping supercar at the show is the Bt150-million McLaren Senna hypercar, the only one unit allocated for Thailand.

The latest McLaren model for Thailand shown at the Motor Expo is actually the 620-hp GT Grand Tourer featuring “Dihedral” doors, but hidden within a secret chamber within the McLaren booth, the white 800-hp Senna (already purchased) is our favorite car this year’s Motor Expo. 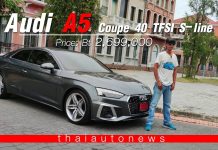 THE PRICE IS RIGHT! 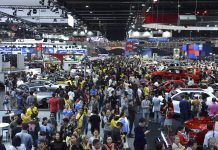 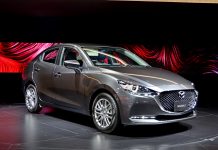