This is the first time that Audi is offering the A1 in the Thai market.

“After three years in the market (through the new distributor Meister Technik Co Ltd), the scenario for the Audi brand has been better than expected, with a large number of customers being interested in our products and placing orders for various models,” Audi Thailand CEO Grisnagorn Sawettanant said.

At 4.03 meters in body length, the new A1 Sportback 5-door hatchback, offered with S line trim, is 56mm longer than its predecessor, resulting in increased interior space.

The 335-liter luggage compartment can be expanded to as much as 1,090 liters with the rear seat backrests folded. The wheelbase has also been extended while the track has also been widened, with short overhangs front and rear.

Customers will appreciate the fully-digital interior, with the highlight being the 10.25-inch Virtual Cockpit instrument panel, as well as the 8.8-inch touchscreen for the infotainment system featuring Audi smartphone interface compatible with Android Auto and Apple CarPlay.

Power comes from a 1.5-liter 4-cylinder turbocharged engine capable of pumping out 150hp and 250Nm. The TFSI powerplant is mated to a 7-speed S-tronic transmission.

Meanwhile, the German auto maker is also introducing the 2.0-litre version of the A7 Sportback (with lower retail pricing) as well as the A6 Avant 45 TFSI quattro S line Black Edition, priced at Bt4.299 million.

Grisnagorn added that Audi plans to launch another new model prior to the upcoming Thailand International Motor Expo in December, as well as increase the number of showrooms in the country.

“We will open a new showroom in the Northeastern region and in the Thon Buri area next year,” he said. Audi currently has showrooms in Bangkok (two), Pattaya, Phuket and a service facility in Chiang Mai, which will be partnered with a new showroom next year.

Audi has enjoyed “super-strong” customer response in Phuket, he said.

“We’ve sold 700 units during the first 9 months of this year and we expect a strong performance in the final quarter which is the usual selling season,” Grisnagorn said. 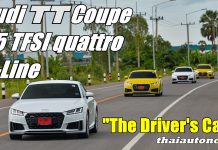 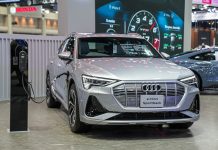