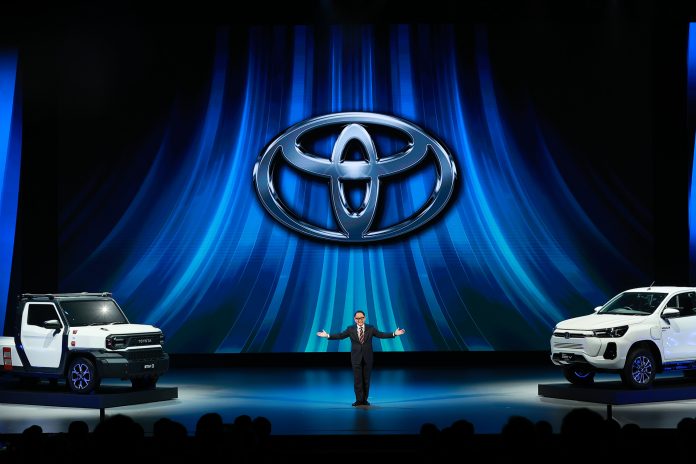 As it celebrates the 60th anniversary in Thailand, Japanese auto maker Toyota aims to make the country a significant hub for the production of automobiles including electrified vehicles.

Apart from being the largest auto manufacturer in the Kingdom with cumulative sales of over 7 million units and cumulative exports of over 5 million units, its Thai operations is ranked fourth in terms of production volume after Japan, China and the US.

Toyota Motor Corp president and CEO Akio Toyoda was in Bangkok for the 60th anniversary celebration event and discussed what the world’s number one auto producer plans for Thailand.

“For me, it’s not about how many cars we’ve sold here, because we want to contribute more to this country than just cars,” Toyoda said. “We want to help foster economic opportunity. This was our goal when we selected Thailand to produce a new global model called IMV (Innovative International Multi-purpose Vehicle).”

The IMV project was announced in 2002 as a new platform for pickup trucks, SUVs and vans. By 2004, the first products were introduced including the seventh-generation Hilux pickup, Innova MPV and Fortuner SUV.

“For me, the Hilux Vigo launch remains one of the fondest memories of my career,” Toyoda added. “So as a way of saying thank you, I decided to create a brand new IMV pick-up trucks for Thailand, which are the IMV 0 Concept and Hilux Revo BEV Concept. Between them, they represent two different ends of the automotive spectrum, for different needs and different customers. One is designed to support economic growth, and the other one designed to support carbon neutrality and a better environment for all.”

“To achieve carbon neutrality, we must remember that carbon is the real enemy, not a particular powertrain. And frankly, BEV’s (Battery Electric Vehicles) are not the only way to achieve the world’s carbon neutrality goals,” he said.

“Also, we are pursuing hydrogen fuel options like these GR-Yaris and GR-Corolla hydrogen powered concept cars. As we work to achieve a sustainable future, I also believe we need to take a holistic approach to carbon neutrality,” he added.

Supattanapong Punmeechaow, Deputy Prime Minister and Minister of Energy, was also present at the event.

“The global automotive industry is facing a new challenge. Hence, the Thai government is committed to promoting a transition from traditional automotive industry to the new era of automotive industry that aligns with Sustainable Development Goals or SDGs.,” he said. “The important aim for Thailand is to achieve carbon neutrality by 2050 and Net Zero by 2065. Therefore, the energy reform plan is one of the strategic drivers and the cabinet has approved specific measures to support the production of electric vehicles in line with the 30@30 policy.”

Toyoda said Toyota cannot work on its own to achieve these goals.

“We can’t reach carbon neutrality on our own. It must be a group effort and include other industries beyond automotive. Which is why I am so pleased to announce today our new partnership with Thailand’s largest private company CP. Together we can reduce Co2 by rethinking the way we deliver consumer goods through zero emission technology like fuel cell trucks and by making driving logistics more energy efficient with our connected technology.  we will also expand CP’s current efforts to make clean hydrogen from bio-mass, like chicken manure.  We are so eager to combine our powers for the greater good,” Toyoda said.

He said the partnership will also include other members of the Commercial Japan Partnership Technologies Corporation (CJPT) including Daihatsu, Suzuki, Isuzu and Hino.

“CJPT was created to address the future of mobility in partnership with others in our industry. We brought our competitors together to unite and strengthen our efforts to build on this new opportunity for C02 reduction,” he said.