Mazda has announced record-breaking performance for the 2018 fiscal year with total sales of over 70,000 units, equivalent to a growth of 25 per cent — the highest for Mazda worldwide for the second straight year.
Mazda now has a market share of 6.6 per cent in Thailand, which is the second-highest for the brand in the world. Thailand is also the sixth-largest market for Mazda globally. The company plans to launch 6 new models in the Kingdom this year, and plans to sell as much as 75,000 vehicles.
Chanchai Trakarnudomsuk, president of Mazda Sales (Thailand) Co Ltd, said, “Mazda has been highly successful this year, with similar calendar year and fiscal year sales. For FY2018, Mazda sales were 70,468 units, surging by 25 per cent compared to FY2017 when we sold 56,379 vehicles for a 6.6-per cent market share, which is second only to the Australian market. Today Mazda Thailand is being closely followed by others due to the highest growth rate for Mazda worldwide for the second year in a row. In addition, sales broke the 70,000-unit mark, allowing Mazda Thailand to move up to sixth position in the Mazda global sales ranking. This year our sales target is 75,000 units, a growth of approximately 5-10 per cent.”
The Mazda2 subcompact remains the most popular Mazda model in the country with sales of 48,119 units, an increase of 36 per cent, and securing the top small car spot for the 11 month in a row. Meanwhile, the Mazda BT-50 PRO is regaining popularity after the introduction of the special BT-50 PRO THUNDER model, with sales of 7,500 units, growing by 29 per cent. The all-new Mazda CX-5 was equally popular, registering sales of 6,834 units, up 7 per cent, followed by the Mazda3 compact car with sales of 4,852 units. The Mazda CX-3 crossover, despite facing fierce market competition, registered sales of 3,132 units while 31 units of the iconic Mazda MX-5 roadster were sold.
As for Mazda sales during Q1 of this year (Jan-Mar 2019), the company sold 16,579 vehicles, which is the same level as the same period last year, for a 6.3-per cent market share. Mazda2 sales reached 12,460 units followed by the Mazda BT-50 PRO with 1,652 units, all-new Mazda CX-5 with 1,021 units, Mazda3 with 887 units, Mazda CX-3 with 509 units, and 5 units of the MX-5.
“Important factors that will help stimulate the automobile market in 2019 stems from the Thai economy that is expanding and improving since the start of the year,” Mr. Chanchai said. “Today we have seen that the economy has improved, the stock market is becoming active again, exports are recovering and tourism is back. Thailand is still an interesting destination for travelers from all over the world, while our agricultural products are fetching better prices. There is more purchasing power in the country. Many businesses are starting to move ahead, particularly the mega investment projects by the government such as the high-speed railway system or even the launching of the economic corridor project, which is aimed at making Thailand a regional economic, trade and investment center, as well as serving as the center for regional transportation.”
Chanchai noted that the Thai automobile market will be highly interesting this year. “Many companies are taking on an aggressive role from the start of the year, and Mazda will be launching a large number of new models this year too.”
Thee Permpongpanth, vice president for Marketing and Government Affairs, added, “This is the year that Mazda will go through a very important change. We have started planning communications to customers involved with the 7th-generation model (or G7) which will be officially introduced during the second half of the year, along with other models, totaling 6 models covering every major segment.” 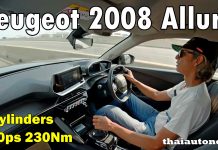 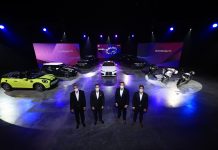 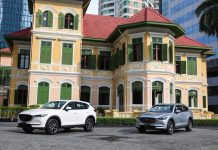