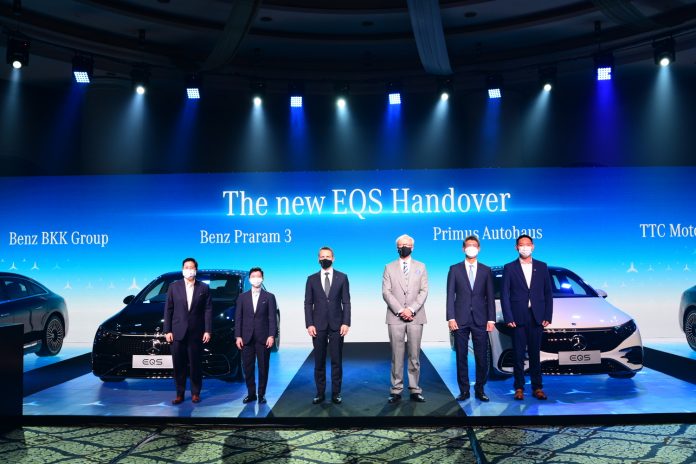 Deliveries of the first Mercedes-EQ EQS electric cars is set to commence with the first four units being handed over to four authorized Mercedes-EQS dealers.

They include Benz BKK Group, Benz Praram 3, Primus Autohaus and TTC Motor. The first EQS deliveries consist of CBU (Completely Built Up) imports priced from Bt8.57 million for the 450+ AMG Premium to Bt8.87 million for the 450+ Edition 1, while the locally-assembled version with lower pricing will be introduced during the final quarter of 2022.

Roland Folger, president and CEO of Mercedes-Benz (Thailand) Ltd, said “Following the introduction of The new EQS, our first full-electric model in Thailand, which received tremendous response with more than 500 digital leads collected from the Thailand International Motor Expo and public event at Central World and Emporium last year, today, we are handing over the first 4 units of the EQS to support our dealers’ marketing plan. These are only the first of many more EQS models to be delivered to our authorized dealers and customers this year.”

More than 20 orders have been placed for the CBU version of the EQS, while the majority of sales will come from the Thai-assembled version.

Under the global policy of Mercedes-Benz Group AG, the Mercedes-Benz brand is preparing to become an all-electric carmaker worldwide by shifting its strategy from “electric-first” to “electric-only” within this decade, Folger added.

“This shows Mercedes-Benz’s long-term commitment to drive e-mobility trend to contribute to a better environment, which we started through several initiatives including the launch of the ‘Charge to Change’ social movement in 2020, as well as electric-powered innovations which will gradually be introduced to excite consumers nationwide and worldwide from now on,” he said.