Bangkok, Thailand – Mercedes-Benz is confident of maintaining its leadership in the Thai luxury car market after selling over 8,600 vehicles during the first 7 months of 2018, marking a growth of 9 per cent over the corresponding period last year.
Frank Steinacher, vice president of sales and marketing, Mercedes-Benz (Thailand) Ltd, said sales of EQ (Electric Intelligence) models grew by 40 per cent.
“Our Mercedes-AMG brand also received enthusiastic response with sales growing more than 250 per cent year on year,” he stated.

This year Mercedes appointed 12 Mercedes-AMG dealers around Thailand, and also launched locally-assembled AMG models to the market for the first time such as the C 43 Coupe.
The German luxury carmaker is also building a battery plant for its locally-assembled hybrid and plugin hybrid models. This is the company’s sixth global battery production base.
Steinacher made the comments at the official launch event of the minor change S-Class Coupe and Cabriolet at the Waldorf Astoria in downtown Bangkok.

The S 560 Coupe is priced at Bt15.99 million while its soft-top sibling comes with a pricetag of Bt16.72 million.
Both come with a 4.0-liter V8 bi-turbo powerplant capable of producing 469hp and a whopping 700Nm of torque. Mated to a 9-speed automatic transmission, it propels the car from 0-100km/h takes 4.6 seconds while the top speed is electronically-locked at 250km/h.

The facelifted S-Class Coupe and Cabrio also features new headlamps with 47 Swarovski crystals — 17 angular crystals form the flare-shaped daytime running lamps while the remaining 30 round crystals are for the turning lamps. They also get exclusive OLED (Organic Light Emitting Diode) tail lamps.
The low-noise 3-layer fabric soft top can fold away or close back in 19 seconds, up to speeds of 50km/h.
The cabin is inspired by the Mercedes-Maybach S 560, with highlights being the front seats with diamond pattern Nappa leather and massage function.

Driving Assistance and Safety Systems in the 2018 S-Class Coupe and Cabriolet
• PRE-SAFE PLUS is a radar-based collision avoidance and mitigation system. If danger of a rear-end collision is detected, it flashes the rear hazard warning lights at a high frequency to warn the driver following behind. It also initiates preventive occupant protection measures, such as the reversible belt tensioners, and if the vehicle is stationary, locks the brakes in a collision to reduce the forward jerk and thereby reduce the load on the occupants, including the risk of whiplash trauma.
• PRE-SAFE Impulse Side detects the danger of an accident via radar sensors fitted on both sides of the car. If an imminent side collision is detected, it inflates the air chambers in the side bolsters of the backrest. This impulse can move the occupant to the side, away from the acute danger area and towards the vehicle center for better protection before the impact.

• Active Emergency Stop Assist detects absence of steering wheel movement over a predefined period, which suggests that the driver is no longer actively driving the vehicle, such as when he/she dozes off or falls unconscious. It will give the driver a visual and audible prompt to place his/her hands on the wheel. If the driver fails to respond after repeated prompts, the car will be slowed down in the identified lane until it comes to a standstill and warn the following traffic by means of hazard warning lamps.
• Evasive Steering Assist uses radar sensors and MPC camera to detect pedestrians and/or objects in the danger zone in front of the vehicle, and then alert the driver to initiate an evasive action. It also applies additional steering torque in the direction of that evasive manoeuver to help the driver evade the obstruction in a controlled, stabilized manner.

• Active Distance Assist DISTRONIC controls the distance from the vehicle ahead using the radar sensors fitted on the front bumpers to actively determine a safe distance in relation to the speed being used. The system can automatically slow down the car, including applying about 50% of normal brake force to keep it at the driver’s preset distance from the vehicle ahead. Moreover, the car can automatically move off and follow the traffic ahead after stops of up to 30 seconds.
• Active Blind Spot Assist reduces risk of side collisions with other vehicles, including motorcycles, in the blind spots. If it detects a danger of side collision within predefined range or three meters to the left, right or rear end when a turn indicator is actuated at driving speeds of 12 km/h and higher, the system warns the driver by flashing a visual alert in red on the corresponding side-view mirror plus an audible alarm. Besides, if the driver fails to respond, automatic braking on one side of the vehicle is applied to help avoid the collision and assist the vehicle back into lane.
• Active Lane Keeping Assist is able to warn the driver when the vehicle is unintentionally drifting out of its lane by applying the brakes on one side to pull the vehicle back into lane. Such intervention also takes place when there is a danger of collision with a vehicle in the next lane, especially on multi-lane roads.

• Active Braking Assist with Cross-Traffic Function helps the driver avoid impending collisions with other vehicles and with people at cross traffic. Using radar sensors on the front bumper and the MPC camera, it gives an audible warning when a danger of collision is identified. When the driver applies the brakes, the system provides situation-related braking assistance, but if the driver fails to take any action to defuse the dangerous situation, it applies autonomous emergency braking. In situations that a front collision is not avoidable, the car will be slowed down to reduce severity of the accident.
• Parking Pilot with Active Parking Assist facilitates entering and leaving parallel and end-on parking spaces. The 360° camera transmits realistic images of the vehicle and its surroundings to the display in a choice of different views, including top view that show obstacles around the vehicle. When parking at a manoeuvering speed up to 10 km/h, the system is able to warn the driver with audible and visual alarms. In conjunction with active steering, speed control and autonomous reverse gear engagement, it makes parking effortless even in limited spaces and surroundings that need multiple manoeuvers. For added safety, Drive Away Assist alarms the driver when any risk of collision arises, for example if the driver mixes up the accelerator and brake pedals or if the wrong gear is selected. 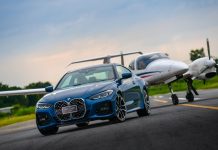 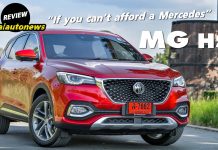 MG HS REVIEW: “If you can’t afford a Mercedes” 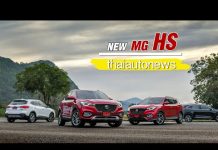 MG does it again with HS SUV